Gay Degani lives with her husband in a Victorian house in Southern California where flocks of parrots congregate at dusk in the surrounding oak and camphor trees.

Her stories can be found online in Atticus Review, Prime Number, Metazen, JMWW, Every Day Fiction, and Monkey Bicycle among others. They have been included in print anthologies such as W. W. Norton’s Hint Fiction: an Anthology of Stories in 25 Words or Fewer, Short Story America, LAndmarked for Murder, Little Sisters, Thriller! (A Young Adult Anthology), Stripped, and in print magazines Crimespree and Bosque (the Magazine).

Her work has been nominated for Pushcart consideration three times and her flash piece “Something about L.A.” won the 11th Annual Glass Woman Prize. “Monsoon” was a Glimmer Train finalist, “Spring Melt” was a finalist for the 2nd Annual Micro Fiction Award, and she won first place in a Women on Writing Flash Fiction contest with “Beyond the Curve.”

An active member of the online writing community, Gay is the founder and editor-emeritus of Flash Fiction Chronicles, a magazine with the mission to help in the growth of quality flash fiction both online and in print.

She blogs at www.gaydegani.com, where you can also find a complete list of her works and connect with her on social media.

Her collection of short fiction, Pomegranate Stories, was published in 2009 and is available at Amazon and other retail outlets. So too is the collection Rattle of Want, published by Pure Slush Books in 2015. 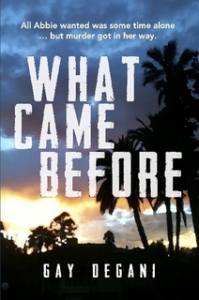 Truth Serum Press published the second edition of Gay’s mystery novel What Came Before in July 2016.

Click on the front cover image right for What Came Before in paperback.

Gay has also contributed to the anthologies Gorge, Catherine refracted, Five, Summer and A Year in Stories.